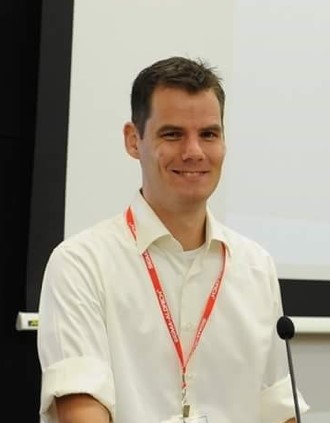 Ever thought about driving your car with fuel made out of thin air or fertilizing the land with molecules obtained from the air? These are just a couple of the possibilities Assistant Prof. Graham de Ruiter, a new recruit to the Schulich Faculty of Chemistry, is dealing with.

Dr. de Ruiter’s lab is engaged in taking the common constituents of air (carbon dioxide, dinitrogen, and dioxygen) and converting them into useful chemicals that can be used as fuels, fertilizers, or other value-added compounds.

His inorganic materials laboratory relies on taking carefully designed inorganic metal complexes and self-assembling them on electrode-surfaces. This solid-state assembly results in molecular complexes that are only a few nanometers (one billionth of a meter) thick. These assemblies are able to catalyze important chemical reactions that convert carbon dioxide to bio-friendly fuels such as methanol and ethanol, or to other useful chemicals such as ethylene.

Moreover, he envisions that eventually these catalytic surfaces will be able to tackle one of the most difficult transformations in inorganic chemistry; the conversion of dinitrogen (N2) to ammonia (NH3), which – as a fertilizer – is crucial for feeding the planet.

Dr. de Ruiter’s lab is one of the few labs in Israel trying to integrate molecules in catalytic surfaces. He explains, “Being a member of GTEP actively contributes to our research program by providing invaluable resources and collaborative expertise that our team actively uses to integrate our catalytic surfaces into existing solar cell technologies, leading to the ultimate goal: powering the planet with ‘solar derived fuels’. GTEP provides me with the ideal interdisciplinary setting between chemistry and materials engineering.”

He was born in the Netherlands and received his BSc and MSc degrees at Leiden University, he did some of his MSc studies at Weizmann Institute of Science and after obtaining his PhD from the Weizmann Institute of Science, he performed post-doctoral work at the California Institute of Technology. During his studies, he received a number of prestigious awards and prizes including the Azrieli Fellowship for 2017-2020. He also is a Horev Fellow in the Schulich faculty of chemistry at Technion.

Dr. de Ruiter’s decision to settle in Israel sprang from his admiration for the country, the wonderful friends he made and his desire to contribute his expertise. His decision to join Technion was because of the outstanding faculty and facilities and Technion’s expertise in chemistry and engineering.