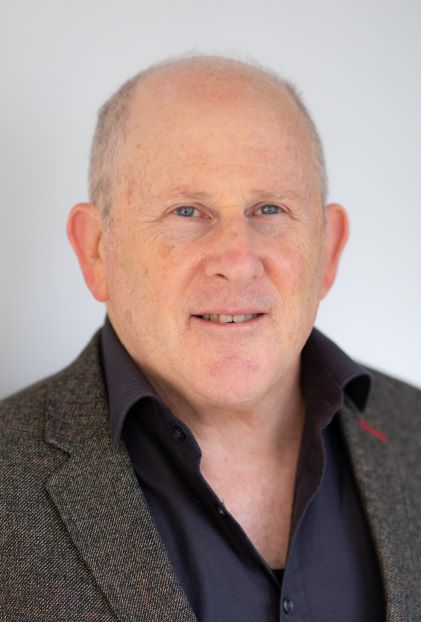 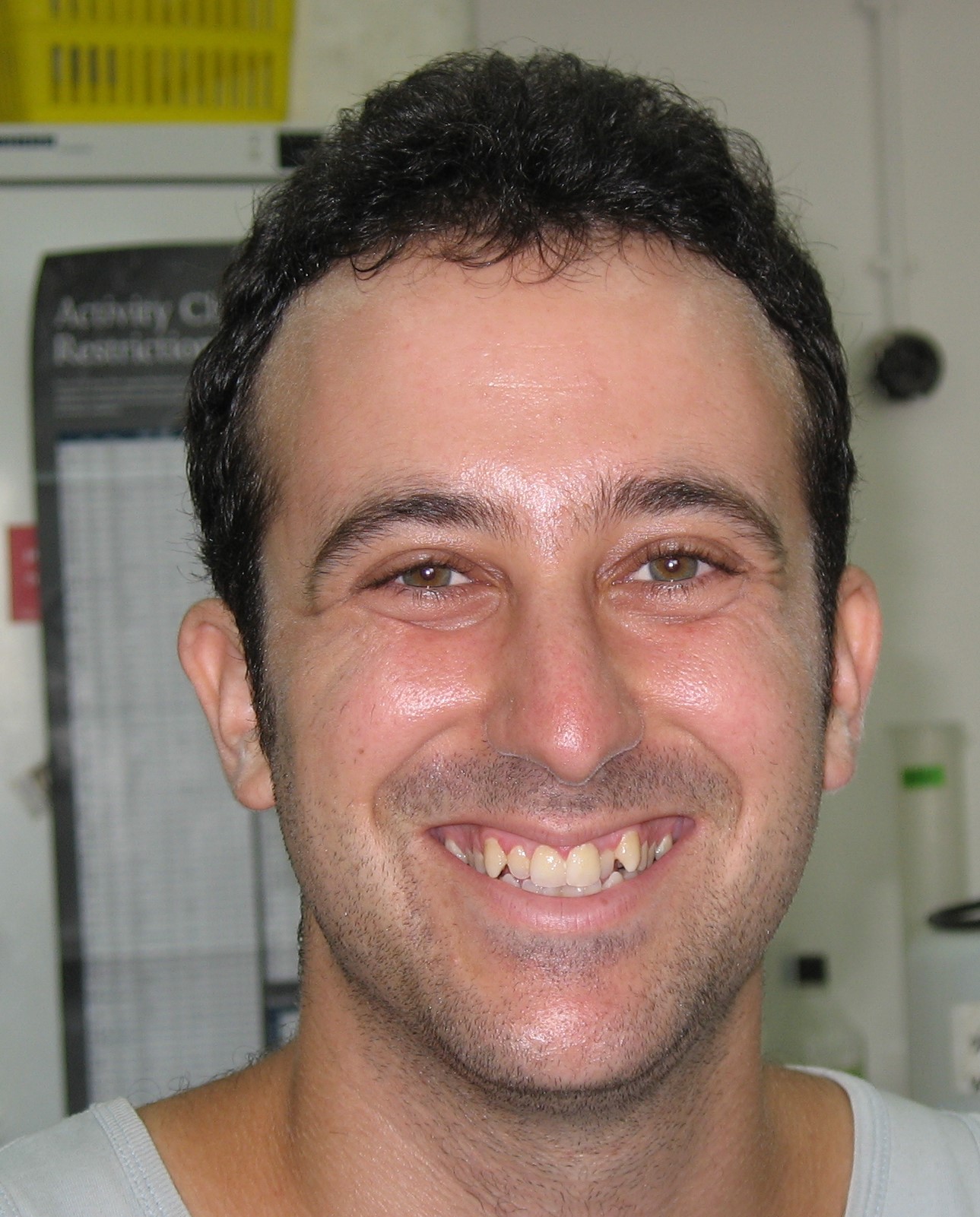 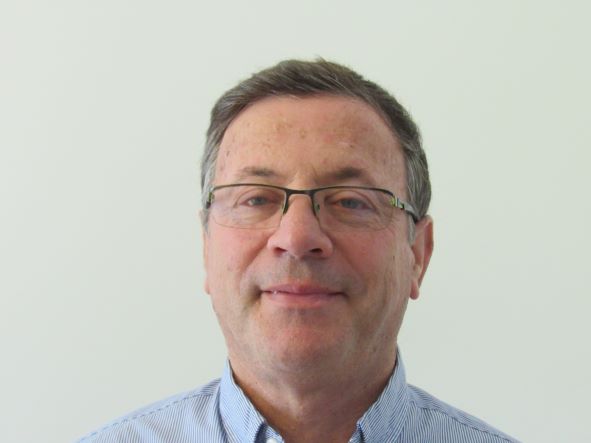 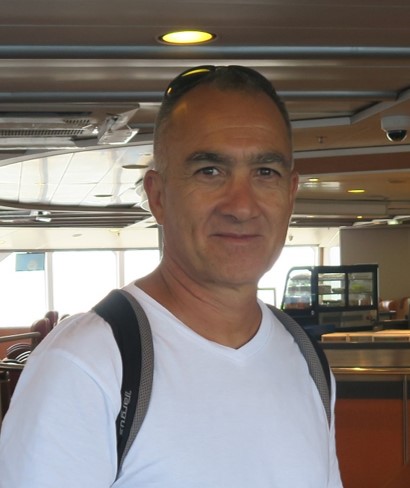 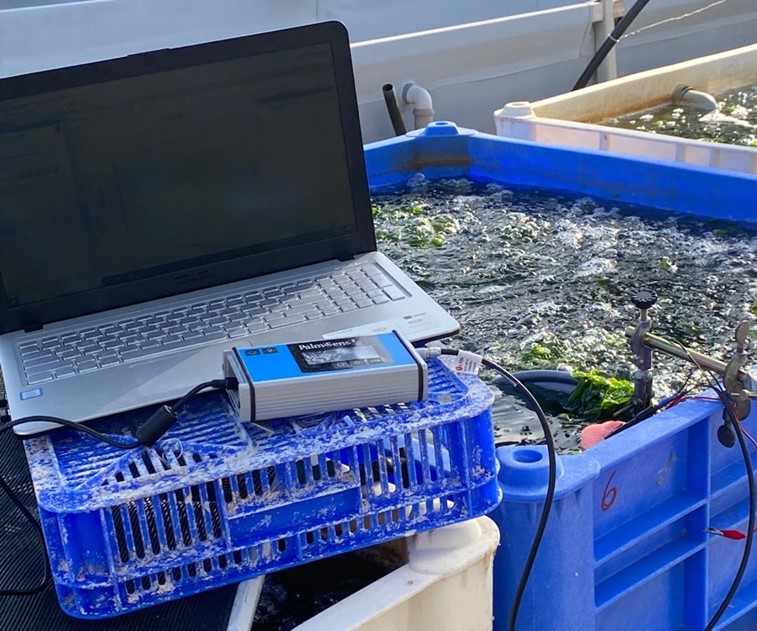 The picture shows one of the seaweed (Ulva) growth vats at the Israel Oceanographic and Limnological Research Institute (IOLR) in Haifa. The vat is near the beach, and fresh seawater continuously flows through the system. Inside the vat we have introduced the electrochemical system. As the Ulva move in the vat, they associate with the electrode, producing a light-dependent electrical current that is measured by the external computer-operated potentiostat

The picture depicts a simulation of the processes harvesting electrical current from seaweed. The seaweed releases known molecules that transport electrons to a stainless-steel electrode (the anode). The electrons transfer to the second electrode (a platinum cathode) which can reduce protons found in the seawater electrolyte solution to hydrogen gas. The current can either be used directly, or if hydrogen is produced, the gas can be used as a future clean fuel. In the dark, the seaweed produces about 50% of the current obtained in light, as less electrons are produced in the absence of the photosynthetic process

Electricity from the Sea

Researchers from the Technion have developed a new method that harvests an electrical current directly from seaweed in an environmentally friendly and efficient fashion. The idea, which came to the doctoral student Yaniv Shlosberg while swimming at the beach, has been developed by a consortium of researchers from three Technion Faculties who are members of the Grand Technion Energy Program (GTEP), along with a researcher from the Israel Oceanographic and Limnological Research Institute (IOLR).

The use of fossil fuels results in the emission of greenhouse gases and other polluting compounds. These have been found to be connected to climate change, as evidenced by a variety of terrestrial phenomenon that have brought climate change to the forefront of global concerns. Pollution due to use of these fuels starts from their extraction and transportation around the globe, to be used in centralized power plants and refineries.

These problematic issues are the driving force behind research into methods of alternative, clean and renewable energy sources. One of these is the use of living organisms as the source of electrical currents in microbial fuel cells (MFC). Certain bacteria have the ability to transfer electrons to electrochemical cells to produce electrical current. The bacteria need to be constantly fed and some of them are pathogenic.

A similar technology is Bio-PhotoElectrochemical Cells (BPEC). As for the MFC, the source of electrons can be from photosynthetic bacteria, especially cyanobacteria (also known as blue-green algae).  Cyanobacteria make their own food from carbon dioxide, water and sunlight, and in most cases they are benign. In fact, there are cyanobacteria such as Spirulina, that are considered “super-foods” and are grown in large quantities. The research groups of Profs. Adir and Schuster have previously developed technologies that utilized cyanobacteria for obtaining electrical current and hydrogen fuel, as published in Nature Communications and Science. Cyanobacteria do have some drawbacks. Cyanobacteria produce less currents in the dark, as no photosynthesis is performed. Also, the amount of current obtained is still less than that obtained from solar cell technologies, so that while more environmentally benign, the BPEC is less attractive commercially.

In the present study, the researchers from the Technion and IOLR decided to try to solve this issue using a new photosynthetic source for the current – seaweed (macroalgae). The research was led by Prof. Noam Adir and the doctoral student Yaniv Shlosberg, from the Schulich Faculty of Chemistry and GTEP. They collaborated with additional researchers from the Technion: Dr. Tunde Toth (Schulich Faculty of Chemistry), Prof. Gadi Schuster, Dr. David Meiri, Nimrod Krupnik and Benjamin Eichenbaum (Faculty of Biology), Dr. Omer Yehezkeli and Matan Meirovich (Faculty of Biotechnology and Food Engineering) and Dr. Alvaro Israel from IOLR in Haifa. Many different species of seaweed grow naturally on the Mediterranean shore of Israel, especially Ulva (also known as sea lettuce) which is grown in large quantities at IOLR for research purposes.

After developing new methods to connect between the Ulva and the BPEC, currents 1000 times greater than those from cyanobacteria were obtained – currents that are on the level of those obtained from standard solar cells. Prof. Adir notes that these increased currents are due to the high rate of seaweed photosynthesis, and the ability to use the seaweed in their natural seawater as the BPEC electrolyte – the solution that promotes electron transfer in the BPEC. In addition, the seaweed provides currents in the dark, about 50% of that obtained in light. The source of the dark current is from respiration – where sugars made by the photosynthetic process are used as an internal source of nutrients. In a fashion similar to the cyanobacterial BOEC, no additional chemicals are needed to obtain the current. The Ulva produce mediating electron transfer molecules that are secreted from the cells and transfer the electrons to the BPEC electrode.

Fossil fuel-based energy producing technologies are known as “carbon positive”. This means that the process releases carbon to the atmosphere during the fuel combustion. Solar cell technologies are known as “carbon-neutral”, no carbon is released to the atmosphere. However, the production of solar cells and their transportation to the site of use is many times more “carbon positive”. The new technology presented here is “carbon negative”. The seaweed absorbs carbon from the atmosphere during the day while growing and releasing oxygen. During harvesting of the currents during the day, no carbon is released. During the night, the seaweed releases the normal amount of carbon from respiration. In addition, seaweed, especially Ulva, are grown for a variety of industries: food (Ulva is also considered a super food), cosmetics and pharma.

“It is a wonder where scientific ideas come from” says Yaniv Shlosberg, the graduate student who first thought of the possibility of using seaweed. “The famous philosopher Archimedes had a brilliant idea in the bathtub, leading to the “Archimedes’ Principle”. I had the idea one day when I went to the beach. At the time I was studying the cyanobacterial BPEC, when I noticed seaweed on a rock that looked like electrical cords. I said to myself – since they also perform photosynthesis, maybe we can use them to produce currents. From this idea came the collaboration from all the Technion and IOLR researchers which led to our most recent paper. I believe that our idea can lead to a real revolution in clean energy production”

The Technion/IOLR researchers built a prototype device that collects the current directly in the Ulva growth vat. Prof. Adir adds: “By presenting our prototype device, we show that significant currents can be harvested from the seaweed. We believe that the technology can be further improved leading to future green energy technologies”.

Click here for the paper in Biosensors and Bioelectronics