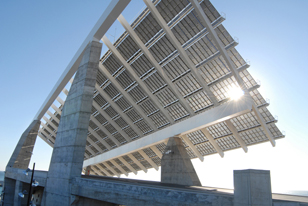 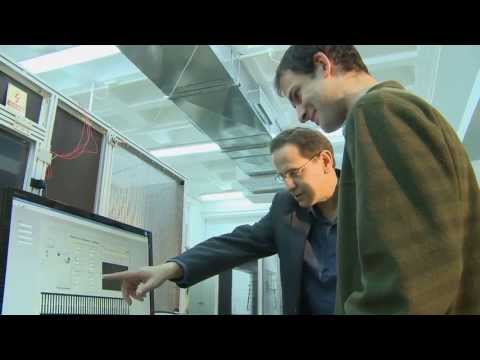 Photovoltaics
More energy from sunlight strikes the earth in one hour than is consumed on the planet in one year. Israel is at the forefront of developing new, cost- and energy-efficient photovoltaic (PV) technologies to convert sunlight into electricity that can be drawn off and used externally. The quest for better light-absorbing materials with higher energy conversion efficiency is underway at the Technion. Beyond being inexpensive, these materials must be durable and able to withstand dust, light and heat. Once developed, photovoltaic cells can be used as integral elements in new construction of ‘green’ buildings that will provide for their own energy needs. The PV project will research and develop a variety of device structures and materials systems (organic, inorganic, composites).

The biggest challenge in solar energy today is not the electricity generation price, which is already under fossil fuel price for photovoltaics (PVs) (<0.04 $/kWh), but rather the ability to store utility-scale electricity at competitive prices. To date, the only method to efficiently and reliably store such energy is Thermal Energy Storage (TES) which is combined with Concentrated Solar Power (CSP). Despite its past decline, demands for CSP are increasing that require alternative dispatchable energy generation. However, the combined production and storage price for this technology is still much higher than PVs (0.06 $/kWh – 0.12 $/kWh).

Thermodynamically PVs and CSP relay on two different energy transport mechanisms. PVs relay on the free energy captured in an electron-hole pair generated by the quantum process of photon absorption, while CSP relay on the generation of many phonons in the process of thermalization, where free energy is lost. Even though, these processes may be considered as independent, the generation of electron hole pairs cannot occur spontaneously without the loss of free energy in a thermalization process. If PVs efficiency would tolerate high temperatures (600C), it would be beneficial to concentrate solar radiation onto PVs, harvesting the available free energy, while in parallel harvesting the high quality thermal energy through CSP. This cannot be done with PVs as their efficiency decreases sharply with temperature.

But what cannot be accomplished with electrons can be done with photons, and this is what a group of Technion researchers is doing. GTEP researchers focus solar radiation onto a photoluminescence (PL) absorber experimentally demonstrating 90% quantum efficiency while operating at 600C. The PL has a narrow line shape that matches the band-edge absorption of Si and GaAs PVs, which offers CPV at 40% efficiency with minimal heating. Together with 35% turbine efficiency at 600C their method offers 50% enhancement in the efficiency of CSP, with electricity price down below 0.04 $/kWh opening the door for on demand electricity at silicon price.

Hydrogen is considered one of the most promising clean energy carriers to power vehicles, for grid storage and for other uses. One of the most important advantages of hydrogen fuel is that it can be produced by splitting water so production does not depend on access to non-renewable natural resources. The use of hydrogen fuel would reduce the dependence on fossil fuels such as oil and natural gas, and unlike diesel and gasoline engines that cause pollution, the only byproduct of hydrogen fuel is water.

Because of the advantages of hydrogen fuel, many countries are investing vast sums of money in programs for the development of environmentally friendly technologies for the production of hydrogen. Most hydrogen is currently produced from natural gas in a process that emits carbon dioxide into the air, but it is also possible to produce hydrogen from water by splitting the water molecules into hydrogen and oxygen in a process called electrolysis.

Technion researchers are Israeli pioneers in water splitting by having developed several innovative systems. One group has developed a photoelectrochemical (PEC) cell that utilizes solar energy to split water into hydrogen and oxygen directly, without the need for an external power source. The new process allows geographic separation between the solar farm consisting of millions of PEC cells that produce oxygen exclusively, and the site where the hydrogen is produced in a centralized, cost-effective and efficient manner.

Another water splitting method being investigated now is to get direct solar to fuel conversion using photocatalysis with the use of nanoparticles. The lab has produced a number of different semiconductors, metals and metal oxides. By working with a photo catalyst on the nano scale and understanding the mechanism of the process, the group has been able to achieve 100% photo to hydrogen conversion.

Wind Power
Israel is developing improved technologies for converting wind power into mechanical energy or electricity. The markets for these discoveries exist both in Israel but mainly abroad where stable and consistent winds are prevalent. Wind speeds are seldom constant, and turbines are subjected to large changes in wind speeds and gusts. Present-day machines are not equipped to deal with these large variations, resulting in non-optimum performance and damaging oscillatory loads. Technion researchers are developing advanced actuators integrated into the surfaces of wind turbine blades that offset the negative effects of varying winds and gusts. Preliminary tests show that these actuators can be exploited to increase power output and reduce oscillatory loads on a structure, thereby extending turbine life and preventing failure. Current research at the Technion is aimed at developing and optimizing these actuators.