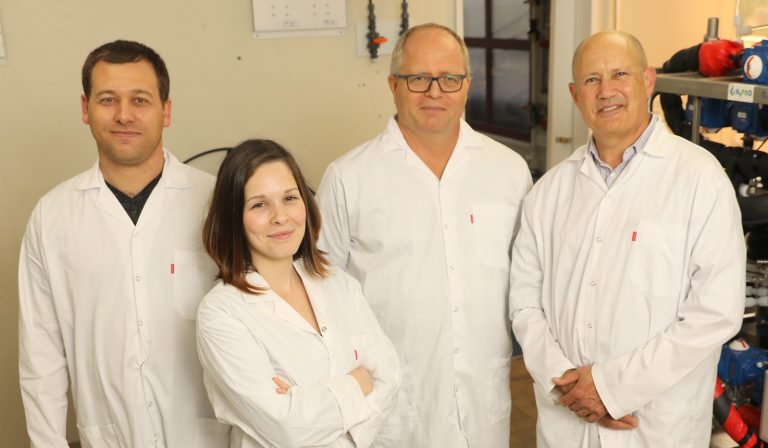 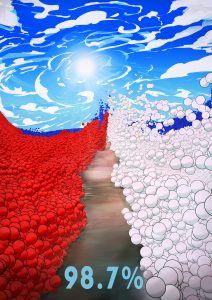 “Water splitting” – illustration. In the ETAC process, water is split into hydrogen and oxygen in two separate steps at a high efficiency of 98.7%. (Credit: Tom Kariv)

Fuel of the Future

Fuel of the Future

Breakthrough at the Technion: Researchers have developed an inexpensive, environmentally friendly and safe hydrogen production technology.

The E-TAC water-splitting technology facilitates an unprecedented energetic efficiency of 98.7% in the production of hydrogen from water and has other key advantages over water electrolysis. A startup company, H2Pro, was founded based on this development and is working on its commercialization.

Researchers at the Technion–Israel Institute of Technology have developed an innovative, clean, inexpensive, and safe technology for producing hydrogen. The technology significantly improves the efficiency of hydrogen production, from ~75% using current methods to an unprecedented 98.7% energy efficiency. The researchers’ finding were recently published in Nature Energy.

The Technion researchers developed a unique process based on a cyclic process in which the chemical makeup of the anode (the electrode where the oxidation process takes place) changes intermittently. In the first stage, the cathode (the electrode where the reduction takes place) produces hydrogen by reducing water molecules while the anode changes its chemical composition without producing oxygen. In the second stage, the cathode is passive while the anode produces oxygen by oxidizing water molecules. At the end of the second stage, the anode returns to its original state and the cycle begins again. This innovative process, called E-TAC water splitting (Electrochemical – Thermally-Activated Chemical water splitting), decouples the hydrogen and oxygen evolution reactions. Based on this technology, the researchers founded H2Pro, a startup company working on converting the technology to a commercial application.

The research, part of the Nancy and Stephen Grand Technion Energy Program (GTEP), was conducted by Professor Avner Rothschild of the Department of Materials Science and Engineering and Professor Gideon Grader of the Faculty of Chemical Engineering, together with Dr. Hen Dotan and Avigail Landman, a doctoral student under the joint supervision of Prof. Grader and Prof. Rothschild.

Enormous amounts of hydrogen are produced annually worldwide: ~65 million tons valued at ~130 billion dollars, with a total energy of ~ 9 exajoules (EJ), the equivalent of ~2,600 teraWatts per hour (TWh). These amounts are constantly increasing and are expected to triple over the next 20 years. Hydrogen consumption is expected to reach 14 exajoules by 2030 and 28 exajoules by 2040.

About 53% of the hydrogen produced today is used to produce ammonia for fertilizers and other substances, 20% is used by refineries, 7% is used in methanol production and 20% serves other uses. In the future, hydrogen is expected to serve additional applications, some of which are in accelerated stages of development: hydrogen as fuel for fuel cell electric vehicles (FCEV), fuel for storing energy from renewable energy sources for grid balancing and power-to-gas (P2G) applications, industrial and home heating, and more.

About 99% of the hydrogen produced today originates in fossil fuels, mainly by extraction from natural gas (SMR).  This process releases ~10 tons of CO2 for every ton of hydrogen and that is responsible for ~2% of all anthropogenic CO2 emissions into the atmosphere. The presence of considerable amounts of CO2 in the atmosphere accelerates global warming. This explains the urgent need for cleaner and more environmentally friendly alternatives for hydrogen production.

Currently, the primary alternative for clean hydrogen production without CO2 emissions is water electrolysis. This process entails placing two electrodes, an anode and a cathode, in alkaline- or acid-enriched water to increase electrical conductivity. In response to passing an electrical current between the electrodes, the water molecules (H2O) are broken down into their chemical elements, such that hydrogen gas (H2) is produced near the cathode and oxygen (O2) is produced near the anode. The entire process takes place in a sealed cell divided into two compartments. Hydrogen is collected in one part and oxygen in the other.

Clean hydrogen production entails a series of technological challenges. One of these is the significant loss of energy. Today the energetic efficiency of electrolysis processes is only 75%, and this means high electricity consumption. Another difficulty is related to the membrane that divides the electrolytic cell into two. This membrane is essential for collecting the hydrogen on one side and the oxygen on the other, yet it limits the pressure in the electrolytic cell to 10-30 atmospheres, while most applications require hundreds of atmospheres of pressure. For example, fuel cell electric vehicles use compressed hydrogen at 700 atmospheres. Today this pressure is increased by means of large and expensive compressors that complicate operation and increase system installation and maintenance costs. In addition, the presence of the membrane complicates the assembly of the production apparatus, significantly raising its price. Moreover, the membrane requires periodic maintenance and replacement.

The E-TAC technology has several significant advantages over electrolysis:

Electrolysis was discovered more than 200 years ago and since then has undergone a cumulative series of individual improvements. Currently the Technion researchers are proposing a disruptive change in concept that they believe will lead to less expensive, clean and safe hydrogen production. They also believe the new process is likely to generate a revolution in hydrogen production based upon clean and renewable energy such as solar energy or wind power.

Initial assessments indicate that it will be possible to produce hydrogen on industrial scales at competitive production costs compared to production from natural gas via SMR and, as noted, without emitting CO2 into the atmosphere.

The developers of the technology—Prof. Gideon Grader, Prof. Avner Rothschild and Dr. Hen Dotan—joined together with the founders of the Viber company to establish H2Pro, a company working on commercializing this new technology. Located in the Caesarea Industrial Park, the company was given an exclusive license by the Technion to commercialize the product and to date has raised ~$5 million in a campaign led by Hyundai. H2Pro has more than 20 employees, most of them Technion graduates.

The research is supported by the Nancy and Stephen Grand Technion Energy Program (GTEP), the Ed Satell gift for Nitrogen-Hydrogen Alternative Fuels (NHAF), the Adelis Foundation, the Ministry of Energy, and the European Commission (EU Horizon 2020 Framework Programme).

For the full article in Nature Energy click here