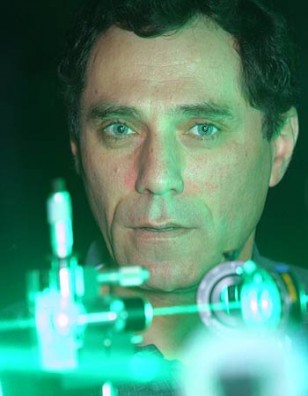 Mordechai (Moti) Segev is a Distinguished University Professor and the Trudy and Norman Louis Professor of Physics, at the Technion – Israel Institute of Technology, Haifa, Israel. He received his B.Sc. and D.Sc. from the Technion, Israel, in 1985 and 1990, respectively. Moti Segev has spent one year at Caltech as a post-doctoral fellow and two more years as a Senior Research Fellow. He joined Princeton in September of 1994 as an Assistant Professor, becoming an Associate Professor in 1997, and a Professor in 1999. In the summer of 1998, Moti Segev went back to his home country, Israel, and joined the Technion, eventually resigning from Princeton in 2000.

Among his most significant contributions are the discoveries of photorefractive solitons, of random-phase solitons (also called incoherent solitons, or self-trapping of solitons made of incoherent white light from an incandescent bulb), the first observation of 2D lattice solitons, and the first experimental demonstration of Anderson localization in a disordered periodic system.

Moti Segev is a Fellow of the Optical Society of America â€“ OSA (1997), a Fellow of the American Physical Society (2000). He has won several awards, among them the Sloan Research Award in Physics (USA, 1995), the Braun-Roger-Siegl Research Award of the Israeli Science Foundation (2002), and the Taub Prize (2003) and the Hershel Rich Innovation Award (2007) of the Technion. In 2007, he won the Quantum Electronics Prize of the European Physics Society (highest European award in optics / lasers / quantum electronics). In 2009 he won the Max Born Award of the OSA (most prestigious professional award of the OSA). In 2008 he won the Landau Prize (Israel). Also, in 2008, he has won the prestigious “IDEAS” (“Leaders in Science”) Advanced Grant from the European Research Commission (ERC). He has served as the General Chair and Program Chair of several international conferences, and two terms as the Topical Editor on Nonlinear Optics in the premiere optics magazine Optics Letters. In 2009 he served as the General Chair of IQEC (the “fundamentals part” of CLEO), and as the Chair of the Awards Committee of the Quantum Electronics Prize (same award he won in 2007). Also in 2009, he was appointed as Distinguished University Professor – the highest rank at the Technion, currently held by only four other professors.