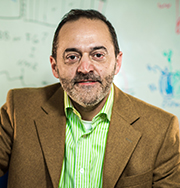 “I focus on developing advanced technologies for electrochemical energy conversion and storage that, more than being reliable, are also functional and affordable to all.”

Prof. Dario R. Dekel investigates novel cutting-edge materials and processes for the development of advanced electrochemical devices, such as redox flow batteries of very high energy density, novel fuel cells, as well as other technologies for energy storage and generation. While existent batteries deliver high power density they offer limited life time and energy density. Dekel’s focus involves ionomeric polymer research (including polymer synthesis) that would lead to a new type of polymer membrane that could dramatically increase energy and power densities of electrochemical devices, while significantly reducing the material and manufacturing costs, and therefore making energy generation and storage affordable to all. Dekel and his research group are considered pioneers in leading the groundwork for polymeric material design research for alkaline batteries and fuel cells. Today, this emerging new field has spawned nearly 50 research groups worldwide focused on the investigation of this concept, and has led to nearly 150 first publications on the topic.

Prof. Dekel has joined the faculty of Chemical Engineering at the Technion and is conducting his research at a brand new lab for advanced electrochemical systems. Dekel is a worldwide expert in alkaline anion exchange membrane fuel cell (AEM-FC) and thermal battery technologies, having authored and coauthored more than 20 patents and papers on the topic; he is also a regularly invited lecturer at technical conferences and universities all over the world. Dekel is the former co-founder and VP of R&D and Engineering of CellEra Inc., a pioneer in the development and commercialization of a Platinum-Free-Membrane Fuel Cell (PFM-FC) technology based on the AEM-FC design developed by his team. In 1998 he was a recipient of the prestigious Katzir Award from the Israeli Ministry of Defense that led him eventually to manage the Thermal Battery Plant at Rafael Advanced Defense Systems Ltd., which grew to an engineering and production team of nearly 100 members and became the world’s second largest Thermal Battery Plant.